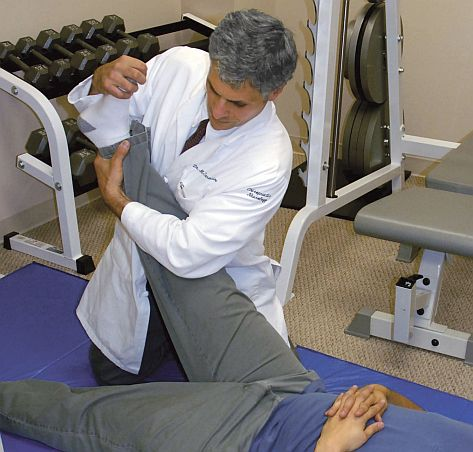 Chiropractic is the art and science of spinal manipulation coupled with the use of other natural methods to restore normal biomechanical joint motion, nerve function and blood circulation to restore health. It is the most sought after holistic health care profession in the Valley Forge Area. The federally regulated Council on Chiropractic Education establishes and enforces professional requirements. Additionally, national and state board examinations are required for licensing in each of the 50 states.

At the National University of Health Science, Dr. Saracino's alma mater, prior to graduation each doctoral candidate must complete a four-year premedical curriculum and five years of professional studies, including internship. National was the first chiropractic educational institution to: be regionally and chiropractic specific accredited; require a four-year prerequisite; have a five-year term; and the first of its kind to have an on-campus chiropractic hospital and publish a scientifically-indexed journal: The Journal of Manipulative and Physiologic Therapeutics.

National was the first chiropractic college to obtain university status, require a bachelor’s degree for matriculates and have a five-year program which included internship. The education is essentially similar to medical school with an emphasis on the neuromusculoskeletal system for diagnosis and treatment. The basic sciences include: biological and anatomy, physiology, histology, biochemistry, clinical, radiological and imaging diagnosis. The clinical sciences include: pathology, orthopedics, neurology, nutrition, psychology, chiropractic specific diagnosis and treatment and extensive clinical training.

The increasing interest by the medical community and general public and scientific evidence confirming its effectiveness for the treatment of motor vehicle accident and work-related injuries has caught the attention of several health associations and government agencies. A 1993 study in the New England Journal of Medicine reported that, "The estimated number of visits made in 1990 to providers of unconventional therapy was greater than the number of visits to all primary care medical providers nationwide." Chiropractic was among the most frequently used non-medical therapy. Fibromyalgia is also treated.

A follow-up report published in the Journal of the American Medical Association in 1998 found that the use of non-medical treatments had increased significantly since the 1990 survey, with "...overall prevalence of use increased by 25%, total visits by an estimated 47%, and expenditures on services provided by practitioners of alternative therapies by an estimated 45%." Of the survey respondents, one in nine (11%) had used chiropractic care within the previous year.